“… Vintskevich realized the idea of Saulsky, which meant bringing the art of jazz right to the province. And bringing it not only to those cities where jazz culture is already known well, but also to the “white spots” of the jazz map of Russia.”

VIII International festival “The Jazz Province” was devoted to the memory of a soviet composer and people’s artist of the RSFSR Yuri Saulsky. The art-director of the festival Leonid Vintskevich said that about the artist: «There are some figures in Russian jazz called iconic. For our generation, for those, who like jazz, this is Yuri Saulsky. Anything that is happening to this particular kind of music nowadays is directly or indirectly connected to his name. He was a surprisingly good-natured man who could notice success of the others and was sincerely pleased with it. He wasn’t just a talented composer – he was an enlightener, the one who devoted his whole life to the development of jazz music from education to the organization of the festivals.»

The debutant of this year was a funk-show-band “Lera Gekhner Band”. Despite the fact that each member of the band deserves a whole story to be told, there is an unconditional leader of the collective – a singer Lera Gekhner. Jazz and Rock’n’Roll standards such as “Georgia On My Mind” and “Ain’t She Sweet” formed the basis of their program.

During the whole festival there were also the members of the academic jazz performing. Academic jazz is that type of jazz where everything is so strict and predictable, but the names of each musician are written down into the world history of jazz music by golden letters. For example, one of the world-wide famous Ukrainian musicians, a professor of the Kharkov’s conservatory, a contrabass player Denis Dudko; the most demanded drummer from Lithuania in Europe Arkady Gotesman; the founder of the festival, a pianist Leonid Vintskevich; one of the most expressive representative of a new jazz generation, a saxophonist Nikolai Vintskevich; a drummer Dmitry Sevastianov, the one who has played with every last one of famous jazzmen of Russia; a participant of the international festivals in Germany and Holland, a contrabass player Igor Condur; a legend of the European jazz, an honored artist of Estonia, a saxophonist Lembit Saarsalu; a famous Cuban percussionist Joel Honsales; and also a singer from a New-York Linkoln-center Eve Cornelius. Besides, representatives from Lithuania took part in the concerts: a saxophonist and keyboardist Vitautas Labutis, a drummer Arvidas Ioffe and a bass-guitarist Leonid Shinkarenko. Our own honored masters went up to the stages: “The Green Wave” ensemble under Aleksandr Oseychuk’s management and a “Cadans-Millenium” under German Lukyanov’s management.

Nowadays festival appeared to be having a strong vocal proclivity. And it wasn’t just vocal, but an acapella one. A well-known sextet from Kiev “Mansound” weren’t the only ones who performed at that time; there was also one of the most famous Russian collectives “A’Capella ExpreSSS”, who were represented firstly for the whole festival’s history. 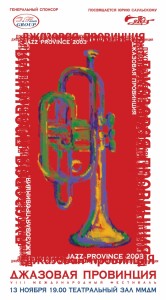 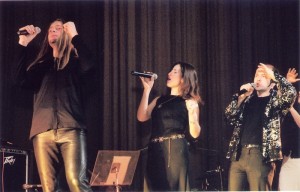 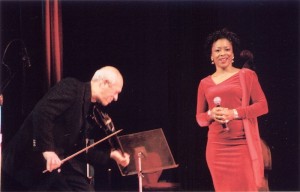 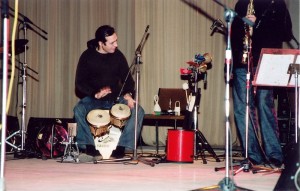 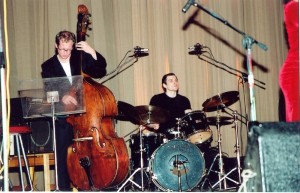