“… There has never been a “Jazz Province” festival before in Ulyanovsk. That’s why almost a thousand people, who were in the concert hall by then, decided that there is no way that could make it further without jazz. They were leaving the hall with reluctance only when it has been said that trams weren’t going anymore.”

A tight veil of secrecy was covering the future of the festival up to the beginning of the first “trail”. It went through Voronezh and Lipetsk, and ended up in Kursk. This time the festival experienced financial difficulties. Russian Cultural Foundation, which earlier dealt with expenses of the festival, turned out to be out of budget. However, the festival took its place and the concerts had taken its place in 7 cities of Russia. Moreover, Ulyanovsk has enriched the number of cities where the festival is usually held.

Besides, there were two European bands, which were alike. The first band, which was a bit more experienced, was called English, though it consisted of British bassist Steve Kershow, Swedish drummer Peter Sverd, and a guitarist Mads Kyolby from Denmark. They were the representatives of the “Stekpanna” trio. The second European band was represented by Germans. A trio from a twin-city of Kursk named “Das Beuteltier”. The name means some kind of a marsupial (a kangaroo). This name was created out of the second name of the Doctor Beultierschpacher, the leader of the band, who was a guitarist and a physicist. Also a contrabass player T.S. Debus and a drummer Hering Cerin took part in the trio.

One of the invited musicians was the debutant of the festival an American vocalist J.D. Walter, who’s singularity was in using electronic effects and loupes during his performances. 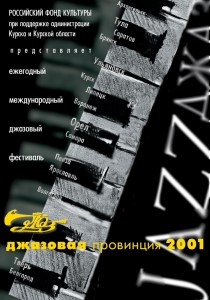